The 10th International Conference on Wired/Wireless Internet Communications – WWIC 2012 will be held in the magnificent island of Santorini, Greece, on June 4-6, 2012.

The goal of the conference is to present high-quality results in the field of global internetworking, and to provide a framework for research collaboration through focused discussions that will designate future research efforts and directions. In this context, the program committee will accept only a limited number of papers that meet the criteria of originality, presentation quality and topic relevance. WWIC is a single-track conference which has reached, within 9 years, the highest level of quality, which is reflected both in the level of participation as well as the acceptance ratio and the amount and quality of submitted papers. Following the conference tradition there will also be a best paper award.

Accepted papers from the Call-for-Papers (CFP) will appear in the conference proceedings published by Springer in the Lecture Notes of Computer Science (LNCS) Series. Extended versions of selected papers will be considered for publication in a special issue of a competitive international journal.

IEEE GLOBAL COMMUNICATIONS CONFERENCE (IEEE GLOBECOM) is one of the flagship conferences of the IEEE Communications Society and high up on my annual conference must-attends.

This year, IEEE Globecom 2010, is held in Miami, Florida and lines-up seamlessly in the hall of fame of this conference series. With 2500 attendees on-site it sets a new record and as usual it features a very comprehensive program with a good number of high-profile speakers from business as well as academia.

Keynote by Yoshihiro Obata, CTO of eAccess Ltd in Japan
A very interesting talk, excellent presentation with a very good mix of industry/company background/insight and technological/research challenges. This is the style of talks you look for at IEEE Globecom.

Here is what Mr Obata had to tell:

– Traditionally, Telco services were controlled by operators (e.g. SMS). With IP services control moves towards devices/applications
– And terminal are no any longer provided by the operator, huge variety in devices, competition high (e.g. Apple vs Google)

– Highest expenses are still with the backbone, eAccess flat rate offers were only possible since they own a backbone, especially in wireless networks is the backbone cost what matters; base stations are not relatively inexpensive

– Volume and characteristic of traffic by corporate users does not cause trouble, i.e. corporate users behave as they follow a certain (manageable) pattern (e.g. peak traffic).

– Reasoning: mobile terminals/services are simpler to use, by potentially more singles and younger users, which are attached for longer periods to their terminals; In contrast, Internet services over fixed (cable, DSL, etc) access require a greater effort to start, in particular the terminal (PC, laptop, etc) and hence users start-use-shut.

– On traffic patterns: 300K (2-5%) users take 50% of the capacity for peer-to-peer traffic, still no issue for state-of-the-art technlogy, annoying though, but the network needs to be sized for full capacity anyways.

– On business in general, telcos need to adapt to change as meanwhile nearly 30% of the user spending goes to the terminal and this takes a major part of the overall budget

Kevin Fall (Intel) WSN Forum
– Observation on WSNs – mostly worried with power consumption, use essentially the same network architecture as any other devices, people mostly use them for trivial scenarios (room temperature monitoring)

– Info-networking (content-centric or data-centric networking) that put data/information in the center of design, architecture, operations instead of hosts

Edward Knightly (Rice Uni) WSN Forum
Edward, how was giving a keynote at my BWA workshop in 2008, talked about „sensing“ in general and took WSNs into the vehicular, smart grid, and eHealth domain. Nothing really new, some of the slides are indeed known for a while (eHealth). What was new though, is that he is promoting „Visible Light Communication“ as a technology for vehicular communications.

– Remote radio head: base stations (eNodeB) are deployed somewhere and connect over fiber to the …

COMCAST IPv6 Forum
– CDNs are starting migration strategies this year (2011)
– Mind that this involves many aspects, way beyond the network, e.g. OS, Apps, OSS tools, CRM, Accounting, BSS in general
– To wait is a risk: v6 introduction takes time, Google needed 3 years
– And there will be more NAT to come in the meantime
– But 90% of v6-readiness can be achieved without turning v6 on!
– How to save cost? Put v6-readiness in your product strategy (TMB: that“s easy said ..) and mind that a customer may need to turn NAT on in order to access your content
– But isn“t v6 broken? No, that“s mostly an issue on your consumer-side and mind, ISP-NAT does not scale and add complexity/unwanted control
– The today challenge of v6 is not so much technology, it“s training of field personell, sales, support, etc
– Comcast is virtually v6 ready

Nokia IPv6 Forum
– Symbian is v6 ready since quite a while
– NAT versus v6, keep-alive versus idle but connected -> NAT drains your mobile“s battery
– Operators will not switch on Voice over LTE in the near future
– More details on NAT: keep-alive commonly in 40sec-5min intervals, can decrease your standby time from days to hours, many different/imcompatible tunneling, very different NATs (home, office, hotspots, ISP-NAT, etc) in terms of traversal mechanisms, frequently poor quality code, mind multi-level NAT (cascades)
– T-Mobile and Nokia run v6-trial in the USA, Nokia supports cell+wifi v6 in the N900 dual-stack.

– Wireless network usage is not uniform, one practical example shows 15% of the cells generate 50% of total traffic

Is there something like „Mobile Cloud Computing“? (a question I am after since early 2009)

A quick Internet research provides evidence that MCC might indeed get away from being a „bwc“ (buzz word combination) and turn into something substantial.

I was attending ICIN 2010 in Berlin. My keynote on „Global Future Internet Research“ can be found on the conference website (link below).

Worthy conference with a good number of talks/attendees. Particularly interesting I found the mixture of people from research and those working on innovation and/or general management.

Few takeaways:
+ IaaS (network+storage+computing) seen as good business model for telcos in the future
+ Value of enforcing an extra revenue share from Google questionable since 25bn (Google) versus 1000bn (Telcos) is peanuts (CEO of Northstream).
+ Appstores/developer communities for telcos of limited value since Appstore mainly a tool for device sales (mobile device manufacturers)
+ Telco““““s shall better look into many smaller business models rather than looking for the next SMS-like killer app (H. Arnold, T-Labs)

The slides of the keynote speakers are meanwhile available for download

I am attending the 1st FUSECO Forum in Berlin, at Fraunhofer FOKUS 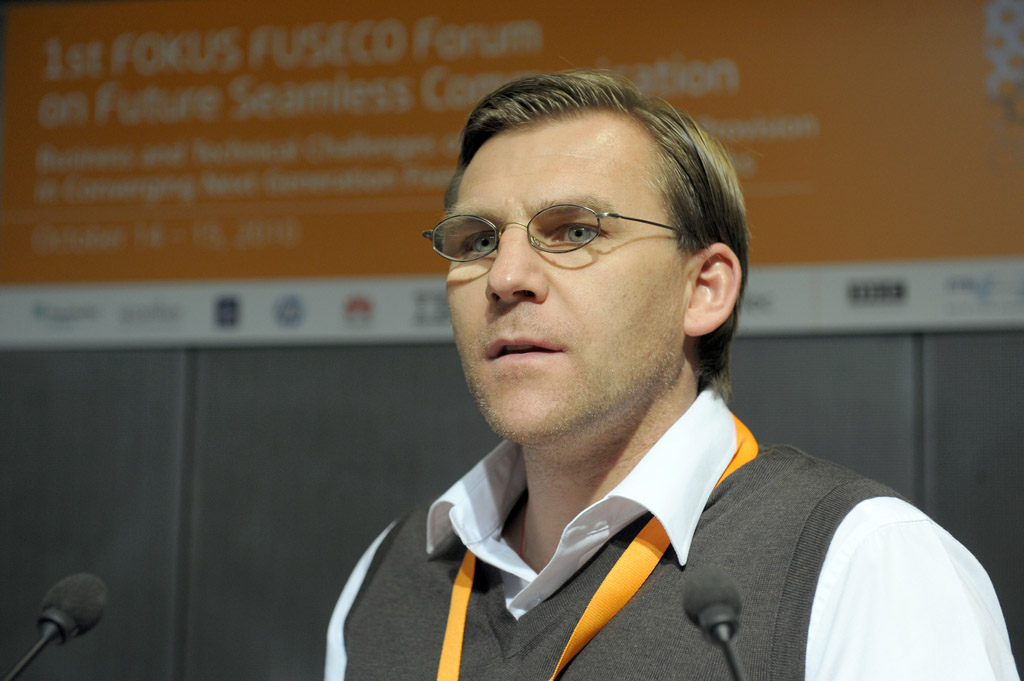 Franz Seiser, Deutsche Telekom AG, Germany
+ Deployment (especially integration) of EPC into existing infrastructure true challenge (despite the streamlined architecture of EPC itself)
+ Roaming (in particular IMS roaming) and QoS (different signalling) big challenge
+ Roaming primarily a European issue
+ Challenge with signalling load in LTE due to non-standard conform feature (immediate dormant mode) of smart phones (for energy saving). Operators don““““““““““““““““““““““““““““““““t have any means to control signaling in their networks
+ Another challenge related to signaling is that LTE/EPS uses Diameter exclusively and hence is not simple to integrate into existing SS7-based 2G/3G systems
+ IMS still way too much focused on fixed networks

+ NSN: currently has (global) 52% of GSM subsribers and 72% of WCDMA, currently 32 LTE networks globally (LTAM, Asia), Germany also close to forefront, NSN roughly 1M LTE basestations deployed globally, devices are already there and comercially available in weeks/month, 50% of NSNs business is already operating networks, 45K LTE basestations to be deployed by Lightsquared and operated by NSN
+ IBM: Germany decreasing telco market, question what can LTE do to solve this – generate more revenue?, Operators have to operate 2G, 2.5G, 3G and soon 4G networks but revenues shrink (~2 percent), challenge / opportunity is cloud computing for enterprises, OTT-provider kept the consumer based for them
+ HP: Offers a combined HLR+HSS product, better work with OTT (like Goolge) rather to fight them
+ Ericsson: IMS already deployed (mostly in fixed domain), Ericsson has a unit Global Services and running (deploying/operating) already hundreds of networks
+ Accenture: One challenge with these technologies is the process change that comes along with convergence (e.g. by EPC/SAE), massive impact on IT systems, changes needed in ticketing, customer support, OSS/BSS, etc, key element to address pressure of decreasing revenues is out sourcing to dedicated specialists in countries abroad (e.g. India, Asia, East-Europe) – examples engineering, operations (e.g. provisioning in shared service centers) and similar.

Alfonso Ehijo, Telmex International, Latin America / University of Chile
+ Verizon does befriend the idea of bit-pipe provider due to compensation by several exlusive partnerships with Google, Skype, and similar content/service providers
+ Relationship (the R in smart) is what really matters (c.f. Verizon)

Roberto Minerva, Telecom Italia, Italy
+ Too many network APIs out there
+ The problem is that Telco““““s are accountable and for that make usage of network APIs complex and heavy
+ Issue is the difference between global Internet services and local communication (network) services
+ IMS will not be able to support services for business services
+ OneAPI is too late
+ Interoperability is an issue for telcos, not the users
+ WebCo(mpanies) are much faster and release alpha versions and by that involve the users early – versus – Telco““““s develop standards over years …

Q&A: There is a big opportunity in the _private_ cloud (Google is not (yet) there) says Sprint

Prof. Marc Drüner, trommsdorff + drüner, Germany
+ Marketing has to go online, „go where the customers are“, people expect the company comes to them,
+ Cool Internet App: Mint.com – manage your financials using the wisdom of the crowds!
+ 75% percent of Indian youth has first contact with Internet via mobile devices
+ Extensive study of Retail Use Cases available by the company

Sebastian Krems, ITCcon GmbH, Germany
+ Wholesale is key to the future and this means partnership
+ Wholesale industry in the telco domain behind to other industries
+ Roughly 250MB of information per year/person, total 1-2extabyte/year
+ Telco industry sustained 50% of price decline/year for the last 30 years
+ Wholesale today: long distance: doesn““““t make a good business anymore -> efficiency and scale are king; access: potential for a long-term business for investors who can sustain a steep ramp-up
+ In the future – wholesale will be all over the place!

Dr. Ralf G. Herrtwich, Daimler AG, Germany
+ The most profitable pieces in a car „integrated solutions“
+ So far web-experience in vehicles are lousy! Network doesn““““t support 200km/h ! – LTE could be the solution

Philipp Freudenberger, SAP, Germany
+ SAP about to take a bold step into the (enterprise) mobility domain (c.f. Sybase acquisition), along with SAP““““s strive for broader adoption of its solutions (goal of 1bn users by end of 2010)
+ Value chains get more and more sophisticated, increasing number of players, stakeholders, – business networks
+ How to make money out of an increasing amount of information? – Example: „from starvation to restaurant to food and payment“, „collaborative eCare“, „utilities – increased collaboration by smart cars, smart meters“, „retail – highly collaborative since customers can use real-time offer/price comparisions“

Closing Note by the Chairman – Thomas Magedanz, TU Berlin / Fraunhofer FOKUS
+ Still many open questions to be answered, especially in view of the more complex value chains in the future
+ Will there be a common platform in the future that supports this value chains and allows for collaborative value proposition?
+ This will be addressed by „Future Internet Research“ !

Interesting statements regarding wiinners-loosers. Cognitive Radio looser, ok, but will 4G be loosing too?.